While football-crazy folks spend large amounts of money flying to Doha to watch super-rich footballers kick a ball about a stadium (built by poor immigrant workers, some dying in the process), I’d like to take you back to the Qatari capital and February 29th 2020. Only two teams pitched up on this occasion: one from the US, the other from the Taliban. A team, from the then Afghan government was not present. Who knows, perhaps for fear they might cry Foul play!? This way, as things turned out, both squads, to use today’s more military footballing parlance, were on the winning side; the pay-off coming the following September when the US, and the UK flew out of Kabul and the Taliban drove triumphantly in. A shameful day, in my opinion, in the way that the bombing of Baghdad, eighteen years before made me ashamed, angry. But this was different. This was a Peace Deal. We were not abandoning the Afghan people. Oh no. This was for their own good.

My partner, the political cartoonist Peter Schrank was working for The Times newspaper that week. An ex-cartoonist myself, my first thought for the women of Afghanistan, grim cartoon image came to mind.

We are not afraid of death . . . the young Afghan woman said on Radio 4’s Today programme. And the anger returned. this morning

The most recent barbarity the Taliban have inflicted on women is a ban on walking in the park – lest they expose the smallest part of themselves to the world. Yet another restriction added to their diminishing lives, to the lengthening list of do nots. Do not go to the gym, do not go to the swimming pool, do not go to school, do not go to secondary school, and as a consequence, most likely, you cannot go to university, cannot work in many, many areas. Do not sing, do not dance, do not travel without a male relative beyond certain distances. And do not complain! What pathetic specimens of mankind these men must be that dare not look their own countrywomen in the eye.

Should an Afghan woman raise her voice against the National Interest, the man from ludicrously-named Ministry of Vice and Virtue said this morning, should she flout any one of the many laws they themselves have created, should she challenge the state, he said, she will be stopped.

We just want to shout, the young woman said. We want to escape.

My natural state that of an inward-looking writer, happiest in the world of my imagination, a place where words can right wrongs, make peace, or turn whatever guiltless, shameless, less angry, more anarchic never-never land I have created upside down in a moment, I am fortunate to have lived my entire life without restriction – aside, that is, from the Covid lockdown, when we were virtually ordered to walk in the park! Not so the brave Afghan woman I heard this morning. She who has dared to set up a library for women – yet to be closed down, she, so far, not imprisoned.

We are not afraid of death . . . she told the journalist, We are scared of being omitted from society. She went on to say that while the mass demonstrations in Iran have [rightly] got a lot of publicity, the ever-shrinking lives of Afghan women [the US and UK abandoned to their fate] have been forgotten, do not make the front pages of newspapers. 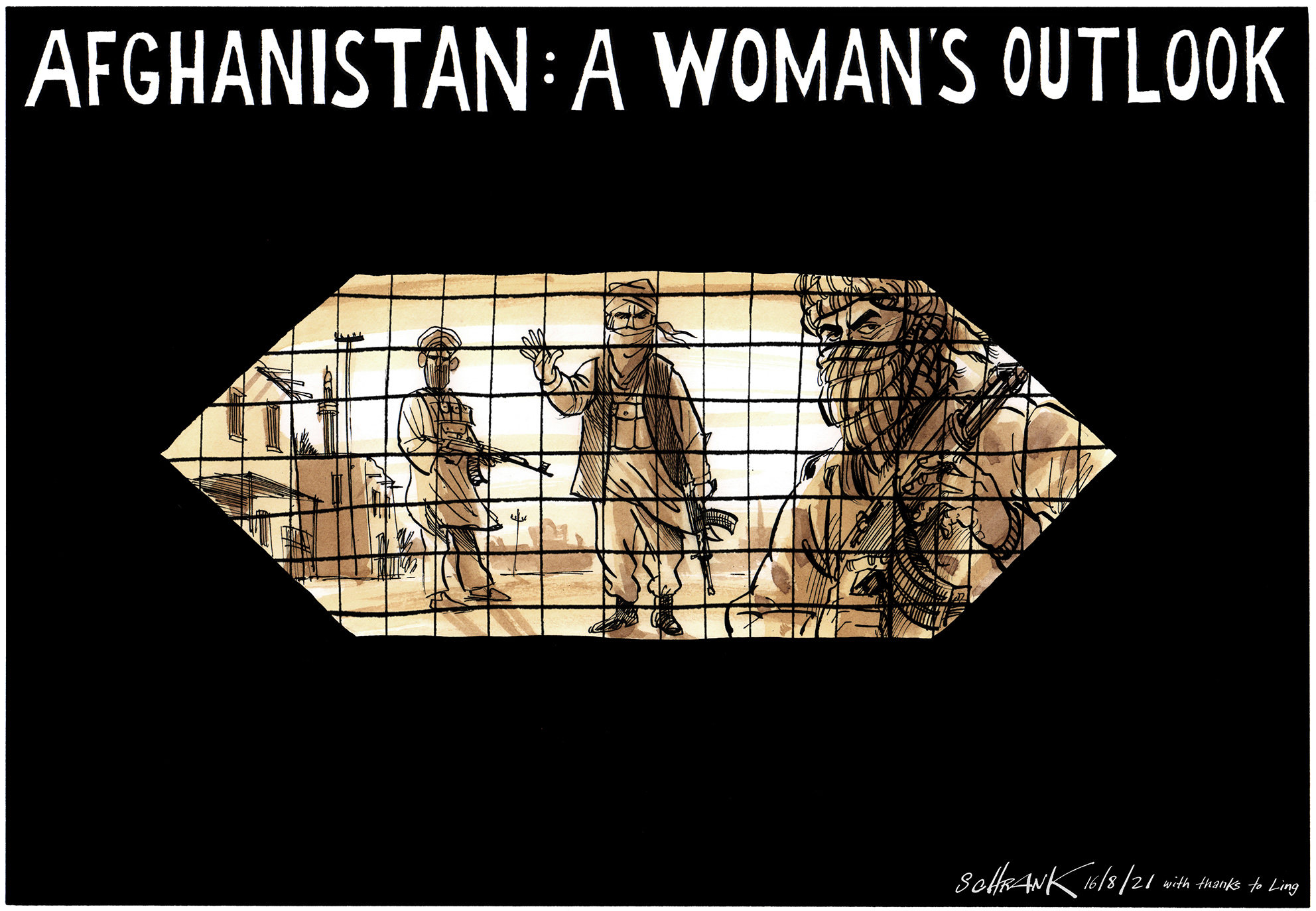 After appearing in The Times, the cartoon made the cover of Courier International a French political/cultural magazine, and went on to win the Political Cartoon of the Year Award 2021.