I have never been someone for whom an annual holiday is a quintessential part of life. This may be due, in part, to my childhood experience of that getting-away-from-it-all word: a working-class background that meant, until the age of twelve, family away-days and a rare visit to relatives had to suffice. Which was fine as far as I was concerned, since, to me, the summer holidays meant six, long school-free weeks. Meant freedom! A word l was born with a particular attachment to. One that, three decades on, drew me to becoming a freelance illustrator and cartoonist (and later writer), vowing never to get a ‘proper job’ again – and being a security-conscious Taurean, holidays were not high on my Must-have list. This personal attitude soon segueing into a political awareness of travel in relation to climate change, and how too many inhabitants on this planet feel they have a right to jet about the world, for pleasure, without thought to the consequences.

On a lighter, less polemical note, let’s face it, holidays can be hard work. If you opt to stay here in the UK (the ludicrously-labelled staycation), chances are you will be packing for at least two seasons, whatever the weather forecasters predict; even climate change deniers must have noted long-term predictions have become less predictable of late. And that off-season swim-wear-and-sarong dream trip to the sun-soaked island you’ve always wanted to go to – and, hell, if you don’t get there this year, who knows, it might soon be washed away – will still require you to layer-up in warm clothing, to get to and from the airport without getting frostbite.

And, now, on top of the list of pre-holiday chores, there’s the newly acquired pandemic pooch to consider – perhaps two pandemic pooches! Do you fork out half the cost of your Turks and Caicos holiday for a stay in the newly-opened Pampered Pooch Chalet and Spa? Or decide to dump Fifi and Bertie on your most agreeable, most put-upon friends – who may or may not be your friends when you return to see their ruined lawn, and hear of the noise nuisance complaint their next-door neighbours made to the council.

I had hoped a global pandemic might force jet-setting holidaymakers to stay put for a year or two, enjoying the delights of these isles. But no. Plenty of intrepid travellers, happy to add the cost of covid tests to their bargain flight, appeared unphased by the prospect of several hours, shoulder-to-shoulder, inhaling their fellow passenger’s invisible particles, as they fly to various overcrowded sunspots. In some cases, only to bring back the very virus they were ‘escaping’ from, on these truly existential holidays.

My partner and I, after two holidayless years, took the easy option – aside from staying at home, that is: a 70 minute drive north, to spend four nights in a cottage on the Norfolk coast, delighted we had found somewhere at short notice. No public transport, no airports, no circulating virus, and easy packing – should we have chosen to toss half our wardrobe in the back of the car. The sun shone especially warm for late September, and much fun was had bitching about the various shapes and sizes, and increasing numbers, of dogs on both high street and beach – as well as the increasing size of many a dog owner! And we came home as refreshed as we might had we spent two weeks away.

Aside from their furry friends, the most essential item that many cannot be parted from, for a minute, keeping it almost permanently fused to their left hand, one I have not got hooked on, is their phone. I do, of course, take mine away with me, checking each day for important messages, but I refuse to check my emails, which remain at home on my computer.

And so it was, returning relaxed enough to wish our break might have gone on for another day or two, that late one late September evening, scrolling through the unexciting bunch of writing and gardening newsletters, RHS, RSL, SOA, as well as the daily deletable dose of stuff, fantasizing the Bridport Prize judges might have had second thoughts, belatedly adding my name to the shortlist, and sending an apologetic addendum, when I see the letters N-S-S-A, read Your submission to the BBC National Short Story Award 2021, and open the email from the BBC Awards Team. By this time, of course, I knew I could not be on the short shortlist. Those 5 writers had been named two weeks earlier. Even so, from the 1100 entries my story had made it to the top 50 from which those five winners had been drawn. And, boy, was it good to be home!

Carpe Diem, my listed story, is the last of three linked pieces, written in 2020. It’s inspiration came from the ballsy, teenage first-person narrator of The Homecoming, which, with eighteen other stories, was published in Appetites: stories of love, sex and death (Matador, October 2019), Edward Gipson, its ninety year-old protagonist, being Zara’s grandfather.

Writing this first blog brought to mind a cartoon from my previous incarnation as a cartoonist and illustrator. Bargain Break comes from Laugh at Life with Maggie Ling, a series in a monthly woman’s magazine running for almost four years, ending when IPC bought the smaller publishing company, prior to closing down Woman’s World. Drawn in April 1990, it seemed pertinent to the times and this piece, the couple at the centre of the series being bona fide staycationers, way ahead of their time. 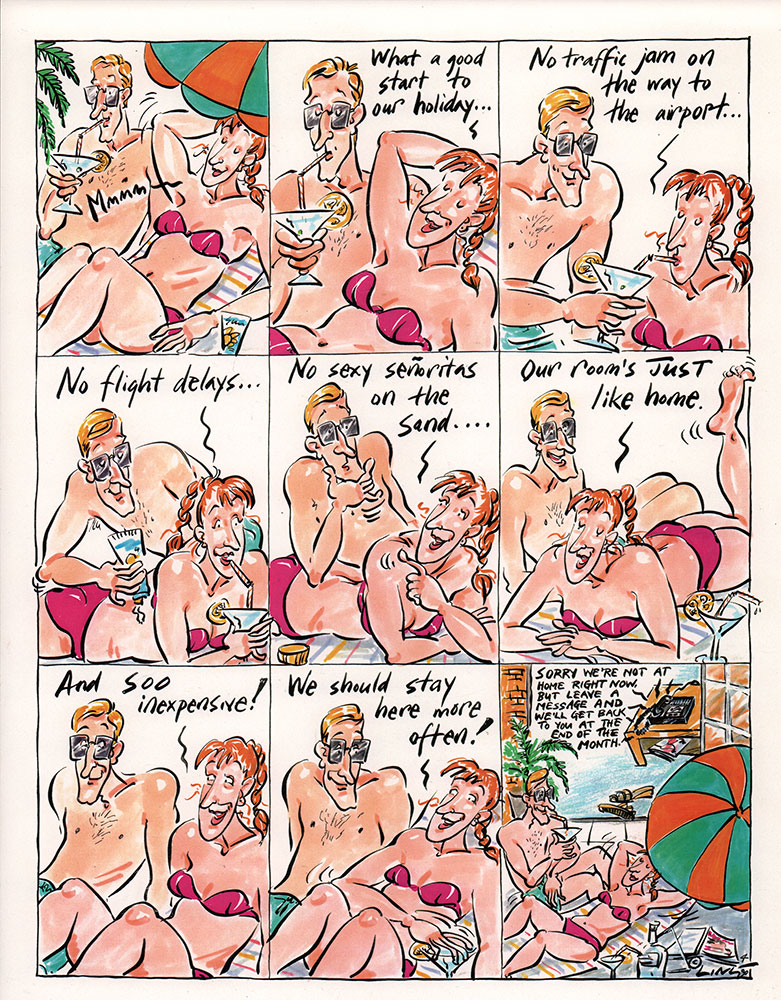